So who the hell is this Dio person?


Diogenes Aurelia Kuhr--commonly known as "Dio"--is the in-world persona I use to explore Second Life, particularly the areas that have an historical theme or which function as immersion environments.

Who am I? Well, that ain't important. Dio's in charge here. She has been known to take on various roles, such as a barmaid or storyteller in the steamlands, or a cranky confederate widow in Old West sims. In the past she's even showed up as Queen Elizabeth I in a Renaissance sim and as Head Librarian at Hogwarts castle. But more often than not, you're gonna find her in places like 1920's Berlin or one of the ancient Roman sims.

If you want to look me up in-world, I can be found in search under the name:

(I just included her rp middle name above because it sounds nice.)

Try reading these and see if they help you make any more sense of this foolishness:

Second Life® and Linden Lab® are trademarks or registered trademarks of Linden Research, Inc. All rights reserved. No infringement is intended. This fansite is in no way affliated with or endorsed by either Linden Lab® or Second Life®. Which should come as no surprise, considering the number of occasions on which I have expressed the idea that if I ever meet Phil Rosedale in person, first thing I'll do is shake his hand and thank him for inventing this world that means so much to all of us. And then I am gonna kick him square in the balls just as hard as I can, in order to thank him for the way he managed LL and allowed a corporate culture to develop in which the creation of unwanted bells & whistles and nipple rings seems to take precedence over actually fixing the goddam platform and making it run reliably and smoothly.

Written content (other than comments) and screen shots generated in SL under the name Diogenes Kuhr, are the intellectual property of the Author, (c) 2007-2010. All rights are reserved, and this material may not be reproduced online or in print form, other than with the express written permission of the author, or as attributed quotations of portions of text and/or use of images for non-commercial review or commentary purposes.

An effort has been made to obtain permission for use or to provide proper attribution for any material generated by others. No infringement has been intended.

If you have questions regarding permission for use or possible infringement issues, please contact the author through the following email address: diokuhr@gmail.com

The most beautiful thing I own in SL 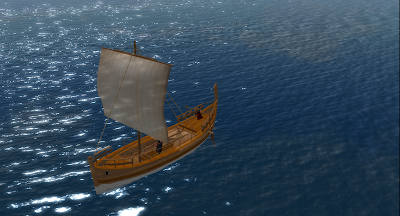 Last night I bought what is undoubtedly the most beautiful thing I have ever owned in SL.

Yes I know, I own some other things that come very close. Like my Kiergarten Armory Sharp's carbine. That is probably the second most beautiful thing I own in SL...and...oh, yeah...Ernst Osterham's boxlock shotgun...and Lockmort Mortlock's SAA Colt....

OK, ok... so I own a number of exquisite objects that have been crafted by SL content makers.

But those things are all tied for second place.

The hands-down most beautiful thing I have ever owned is this recreation of a 4th century BC Greek ship produced by Linteus Dench and sold at the Ars Navalis combination store, dock and museum, which can be found at

Lint and the other folks at Ars Navalis have been making ancient and Gorean sailing ships and galleys for a couple years. I have seen their work before and admired it. We had a couple of his static ship models--ancient Roman merchant ships--in the harbor at the old Alsium build, and I was truly impressed with their detail, historical accuracy and relatively low prim count (83 prims for a large and very authentic cargo ship). But I had not really considered buying one of their ships until last night. I was over at the Ars Navalis docks, looking at their products with my friends Amber and Caius. Finally I just decided, "fuck it, I'm gonna get one of these suckers."

I picked the fat pack of the "Kyrenia" ship, which included a static model, a "drivable" model, and a sailing model. The whole schmear was 2,500 Lindens. The ship is beautifully built, sails nicely in its sailing version, and it is only 26 fucking prims. 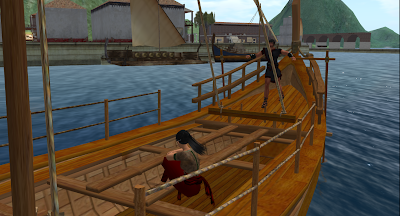 And it's FUN to sail too! Here my friend Caius takes a turn--he had such a good time he bought one of the other Ars Navalis ships the same night!

The only issue I had with it is that because I am such a dinky, delicate little creature, when I was steering my ship, my hands didn't quite reach the crossbars on the steering oars when I was in the steering pose. So tonight I got out my boat at the Ars Navalis docks and began making little handles to attach to my hands when I am steering, so that it would appear that the crossbars are long enough to connect with my hands...and lo and behold, along came Linteus, the owner, and he fixed the problem for me, then and there.

Thanks Lint! You're a real mensch.

And since he was there, I got to talking to him about their operation there.

It turns out that Lint is an archaeologist in his meatspace existence, and builds ancient ships in Second Life because he loves doing it. We talked quite a while about ships and history and how you make things like sailing ships work in Second life. It turns out that my Kyrenia ship is based on an actual wreck that has been excavated, and it took Lint about a year to complete the recreation of it to his satisfaction. Among other things, I learned that the basic style of ship I bought--even though it is based on a wreck dating from the 4th century BC--was used much earlier and continued in use considerably later than that era. So in fact, I can legitimately use it in our 2nd century AD Roman sim. 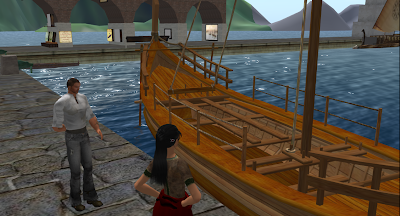 Linteus Dench and the Kyrenia ship.
They have other ships as well..war galleys, rams, Gorean fantasy warships, a 14th century BC trading ship, all for sale--some in versions that can be sailed, some that can be used in naval combat, and others that are simply static models (because they are too high prim to go sailing). Static models seem to mostly run in the 1000 Linden range, while sailing versions are around 2K.

The coolest thing however, is that in addition to the ships that can be purchased--and the availability of some open water so you can try out your new boat right away--there is a museum space with exhibits about ancient ships and information on the written and artistic historical sources that help us to understand the history of these ships. There is even a recreation of an underwater excavation of an ancient wreck. 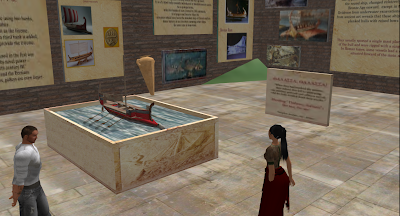 Lint in his virtual museum
The ironic thing is that the other night Serenek and I went to visit a very official, institutionally-created "virtual exhibit" that was ok...but sort of crude and half-assed and oh-so-very-2007. In fact, the build had some recreated sailing ships..that again, were OK...but which were rather sloppily made, poorly textured and ridiculously high prim...like 100's of prims.

This particular "educational" sim apparently has never been updated...as often happens with didactic builds in SL , someone finished the project and walked away from it. And now it's just kinda embarrassing.

But at Ars Navalis, you have an example of someone who built their own museum, not as a project that they did as a "hired gun" content developer, or for class credit, but because they loved the subject and wanted to share their understanding of the story. Even better, they have continued to update and improve the build and its features, while selling you cool stuff they have built so you can really become engaged with the story that is being told. AND you can have some fun at the same time.

Learning...fun...cool stuff...nice and interesting people to talk to....all the things I love about this crazy platform.

Now I just have to think of a good name for my beautiful little ship.
~~~
Posted by Dio at 7:51 PM